Lancer Stud is promoting use of Akhal-Teke in the breeding of event horses, notably the stallion Amadei Geli (pictured right), who is owned by Julia Schmid of Urspring and features in our Lancer Stallions section.

The History of the Akhal-Teke

Interest in the Akhal-Teke as a sports horse is growing, but despite a long and illustrious history dating back to before the birth of Christ, the future of the breed has not always been secure.

Descriptions of horses bearing a remarkable similarity to the modern day Akhal-Teke can be found in writings of the second century Greco-Roman poet Oppian, who described tall horses, with long high set necks and golden shimmering coats. Earlier still, in 102 BC the army of Chinese Emperor Wu Di appropriated herds of the 'heavenly horses', while Greek historians attributed the ancestry of Bucephalos – Alexander the Great's favourite horse – to be, in part, from the steppes and deserts of Central Asia.

Originating from what is now Turkmenistan and northern Iran, the isolation of the Akhal-Tekes homeland ensured purity of breeding for centuries. It wasn't simply their striking appearance that attracted attention; the Akhal-Teke has always been renowned for its speed, stamina and quick reactions. The reputation of Turkmen nomads as fierce mercenaries resulted in a demand for both mares and breeding stallions in the Middle East and Turkey, a situation documented by Italian 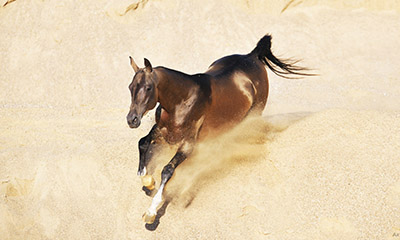 explorer Marco Polo. Finally, in the 17th century the Akhal-Teke arrived in Europe.

With the Russian Empire subjucating the independent Turkmen princedoms in the 1880's, followed fifty years later by the formation of the Soviet Union, the future of the Akhal-Teke looked precarious. Tribal wars were banned, as was private ownership of horses – the original raison d'etre for this warrior horse was gone.

Despite this, in 1896 the future Russian Imperial Minister of War, General Kuropatkin – then Govenor of the Transcaspian Region - initiated the creation of Transcaspia Stables to house a mainly Akhal-Teke breeding programme in the province. With the purchase of the stallion Boinou the stud's reputation grew and with it came a resurgence in popularity for the Akhal-Teke. In 1912 a

reliable studbook was established, laying down breed standards and detailing the bloodlines of the founding sires and their progeny.

The Great War seriously impacted the expanding breeding programmes, threatening extinction. Cavalry officers often chose to ride Akhal-Teke stallions, many of which died at the front. But for an emergency exemption preventing their ongoing use in war, their bloodlines may well have been lost, a situation hindered yet further during the Russian Civil War. Significant damage was done to the breed in Transcaspia where British troops alone were responsible for commandeering 60 stallions.

Fortunately Akhal-Teke breeding continued within the new Soviet state; Turkman breeders once again took up the mantel and played a key role in reviving the industry. Between 1926-1927 some 272 Akhal-Teke stallions were exported to other Central Asian Soviet republics, while some enterprises crossed the Akhal-Teke with English thoroughbreds, creating the Anglo-Teke.

A survey in 1927 by Turkman Soviet Socialist Republic encompassed 837 horses, consisting of 595 mares and 242 stallions of 3 years and older; this was to lay the foundation for the Akhal-Teke studbook.

Fortunes changed once more with a Soviet policy of collectivisation of agriculture in the early 1930’s. The Horse Breeding Farm was decimated and many horses disappeared into Iran and Afghanistan. Efforts to create a comprehensive studbook resumed in 1934 when Mikhail Belonogov arrived in the Turkmen Republic. His works were published in 1941 as Volume III of the State General Stud Book, volumes I and II having disappeared. Volumes IV and V were also completed in his lifetime.

In 1935 Turkmen horsemen riding Akhal-Teke, Yomud, and Anglo-Teke horses undertook a 2,600 mile ride from Ashgabat to Moscow. It took 84 days and included a 3 day/223 mile ride through the Karakum desert. Two of the future Akhal-Teke line founders took part in the ride: Arab and Aksakal. Within three years, the Academy of Agricultural sciences in USSR concluded, “the Akhal-Teke horses possess a unique set of qualities of utmost value,” noting their adaptability to working in harsh conditions in hot climates.

Some Akhal-Tekes were crossed with English thoroughbreds from about 1920, but Vladimir Shamborant – described as 'the most significant breeder of the Akhal-Teke horses in the 20th Century' - reinvigorated the purebreds and there was another renaissance of the breed, notably at both the Ashgabat and Djambul studs. Fortunes continued to fluctuate, improving again in the 1950’s with the creation of the Tersk stud in the North Caucasus: horses from the Tersk, Ashgabat and Lugovskoy studs formed the main body of the breed in the 1960s.

Success on the world stage came at the 1960 Olympics in Rome. Sergei Filatov won an individual dressage gold medal on his Akhal-Teke stallion Absent, the first achievement of this rank for a Soviet rider. The pair followed that with team individual bronze medals four years later in Tokyo.

In 1973 Akhal-Teke studbook work was transferred to the All-Soviet Research Institute of Horse breeding (VNIIK) whose subsequent contribution cannot be overestimated.

Many stud farms were unable to survive the 1991 break up of the Soviet Union, but private studs began appearing in Central Russia. Others are in North Caucasus, Rostov region, Kazakhstan and Uzebekistan. In its homeland, the Akhal-Teke horse has become a symbol of Independent Turkmenistan and the State's coat of arms bears the image of the stallion Yanardag.

Whilst the territory of the former Soviet Union remains the centre of Akhal-Teke breeding, the domain of this ancient breed has expanded considerably in recent years. In 1976 there were just 363 purebred mares, whereas today there are over 2,000 spread across the globe. The horse which has had such a profound influence on breeding across geographical borders for centuries is again much admired. These original 'bloodhorses' are a proven source for breeders to nurture speed, stamina, strength and beauty.

If you would like to learn more about the Akhal-Teke, we recommend buying 'Golden Horse', a book with photography by Artur Baboev (who kindly provided the images for this page) and text by Aleksandr Klimuk. It is published by Abrams, New York in association with PQ Blackwell www.abramsbooks.com